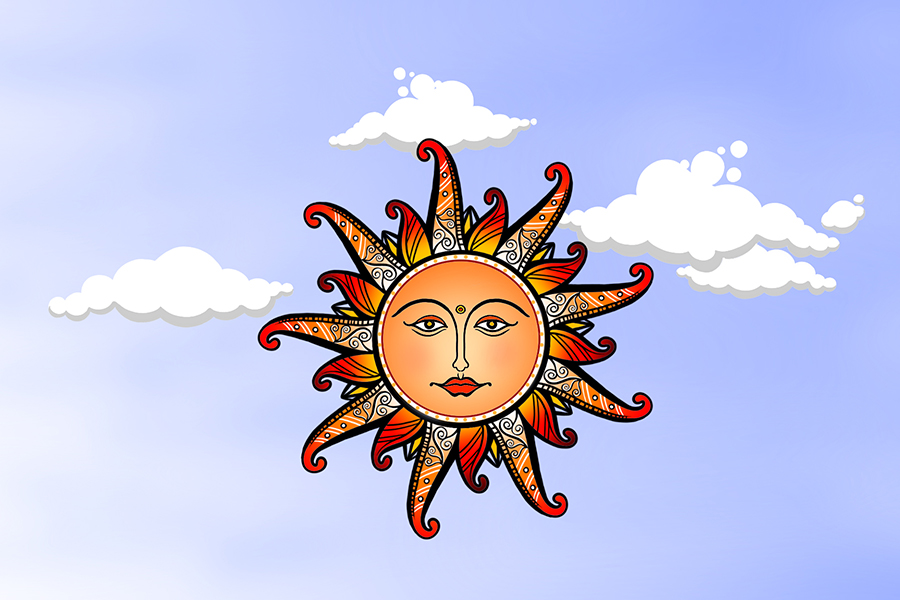 Words -Lakmini Wijemanne Due to the prevailing situation with the Covid-19 Virus, all content and advise in this article may not be practically usable at this time. We advise readers to take note of the applicable content only. Every year, &quot;Koha&quot; reminds us early on, that the new year is just around the corner, and for the past couple of weeks, the whole country has been abuzz with a multitude of preparations to welcome the Sinhala and Hindu New Year, which falls on the 13th April. It is a time in the year, that everything is done following age-old traditions in both the Sinhala and Hindu culture.  According to the astrologers, it is the sun's transition from the Meena Raashiya to Mesha Raashiya completing a cycle of 12 months that is marked by the New Year celebrations. New Year celebrations are tied to the Sun God who is devoutly worshipped by farmers since it is believed that He makes it possible for the farmers to cultivate their lands well to get a good crop. Being able to reap a good harvest makes the farmer able to afford to live comfortably and meet all his needs, till the next harvest. In a way, it is a thanksgiving ceremony to all the Gods, who, in the world of farming are denoted by natural elements - the sun, the rain, water, earth and even the wind - which ensure that the farmer gets to reap a good harvest . In Sri Lanka, agriculture had been the main livelihood of the majority, and thus, it has been treated with much respect and honor. Our whole lifestyle had been fashioned around this way of living, and though much has changed in our lives with the industrialism, still, certain traditions and rituals which have been connected to a agriculture based living, is celebrated with much devotion, since it  denotes who we are, largely. The traditions which have been followed from the time of our forefathers and  rituals connected to Avurudu is performed according the auspicious times set out at the beginning of the year. This year, the auspicious times and the rituals will be observed as follows :

Bathing For The Old Year

Cleansing is one of the main rituals followed, as it is believed that people as well as their abodes should be clean to welcome the Sun God. Signifying the end of the old year, bathing for the old year falls on the 11th April. On this day, it is advised to bathe using a special mixture made with Nuga leaves ( which usually is made and distributed from the village temple ) and spend the day in religious activities. 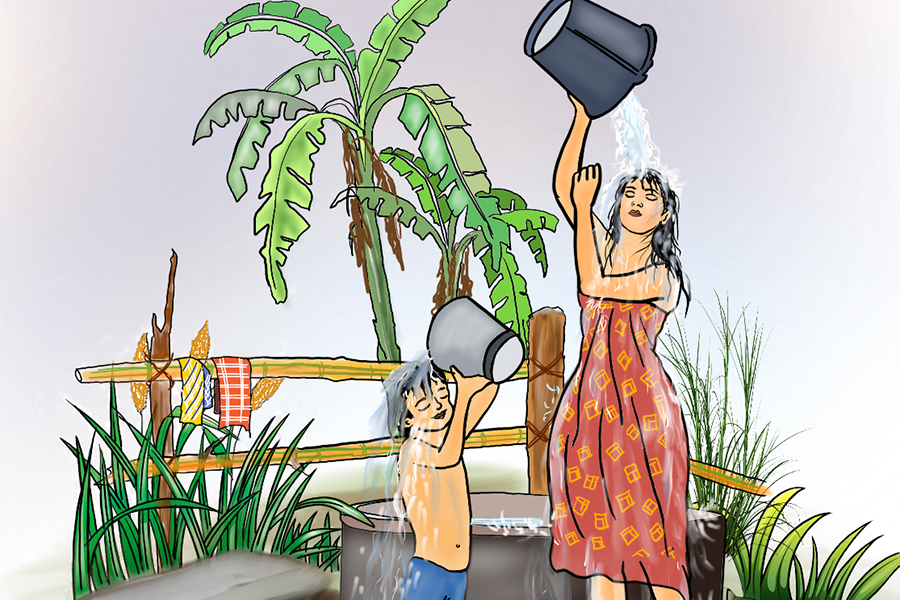 Dawn Of The New Year

The dawn of the new year falls on the 13 th April 08.23 p.m. Before this time, all work and preparations for celebrating the New Year would be completed.

This is the time between the end of the old year and the dawn of the new year. The Punya Kaalaya starts on the 13th April 01.59p.m... and ends on the 14th April at  02.47 a..m. During this period, it is advised to engage in religious activities. All work and partaking of food must stop at the start of the Punya kaalaya till the auspicious time to eat in the new year. 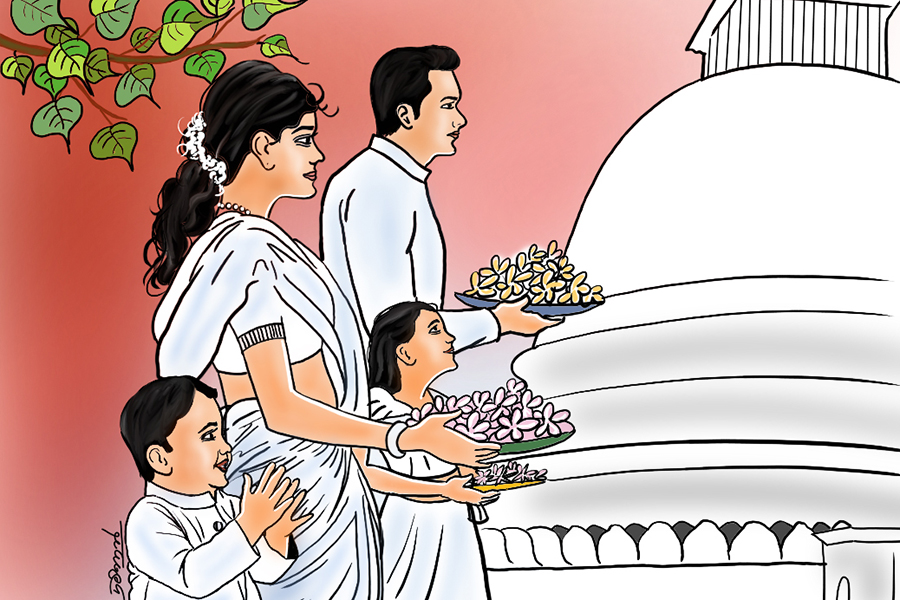 Cooking For The New Year

On the 13th April at 10.05 p.m., dressed in white , facing  East ,cooking for the new year must start, by keeping rice on the new fire, to make milk rice. As rice is the staple diet of Sri Lankans, rice cooked in coconut milk has been an auspicious food item among the Sinhala and the Tamil people. The plate of milk rice, the first food cooked on the newly cleaned and readied hearth, would enjoy the central place of importance among all other food items on the new year table. 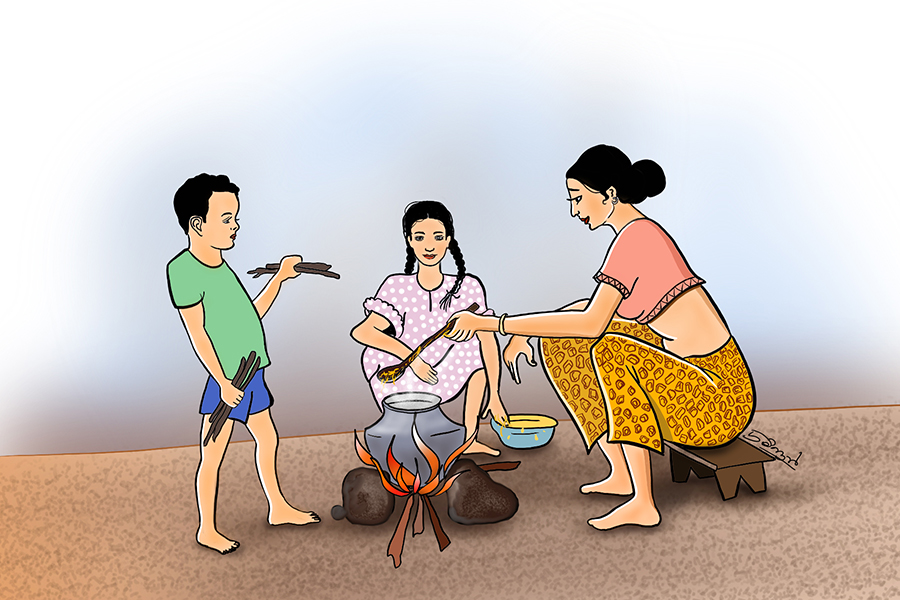 On the 13th April at 10.43 p.m.. facing East direction, dressed in white, it is adviced to partake of the first meal of the New Year. The table would be laid with all the sweetmeats which have been made especially for this moment : Kokis, kavum, aasmi, thala kavum, mung kavum,...... the list goes on. At the auspicious time, the most senior of the household would first light an oil lamp at the table, and keep a tiny piece each from all food items on a seperate plate as an offering for the gods. Then, milk rice would be served to everyone and together, facing south, everyone will eat. After the meal, it is the time for Ganu Denu (exchanging gifts and worshipping elders). Elders would be worshipped with a sheaf of betel leaves and either a token of money or a gift would be given in exchange. Visiting relatives and worshipping elders are practices which promotes good relations to continue, putting aside any shortcoming or angry verbal exchanges between relations during the course of the year. 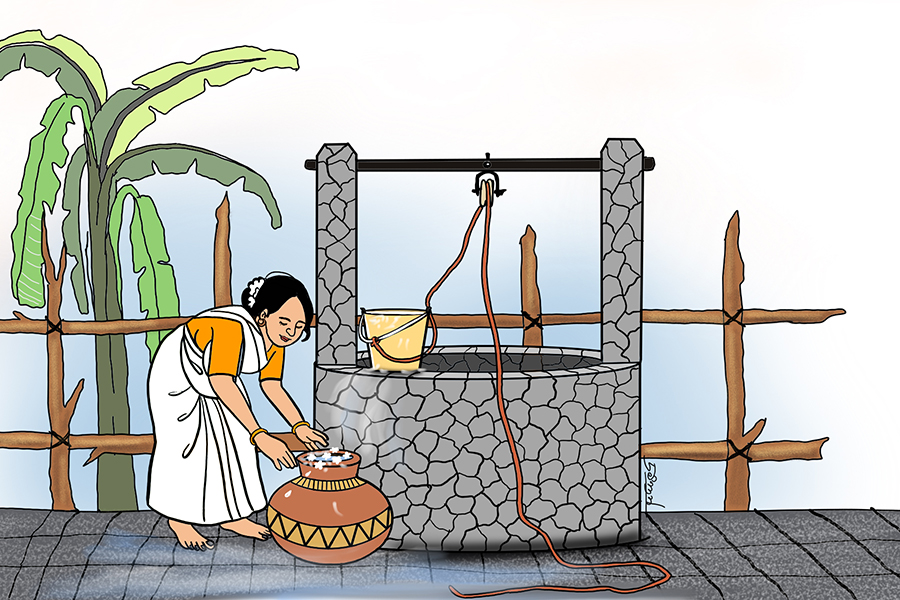 On 15th April at 09.17 a.m. , dressed in blue attire, facing East , bathing for the New Year would be done. The special leaf mix is usually prepared at the temple and distributed to the devotees who come to the temple to get blessings from the chief priest of the temple. The thero would also officiate at the ceremonial anointing at the temple. 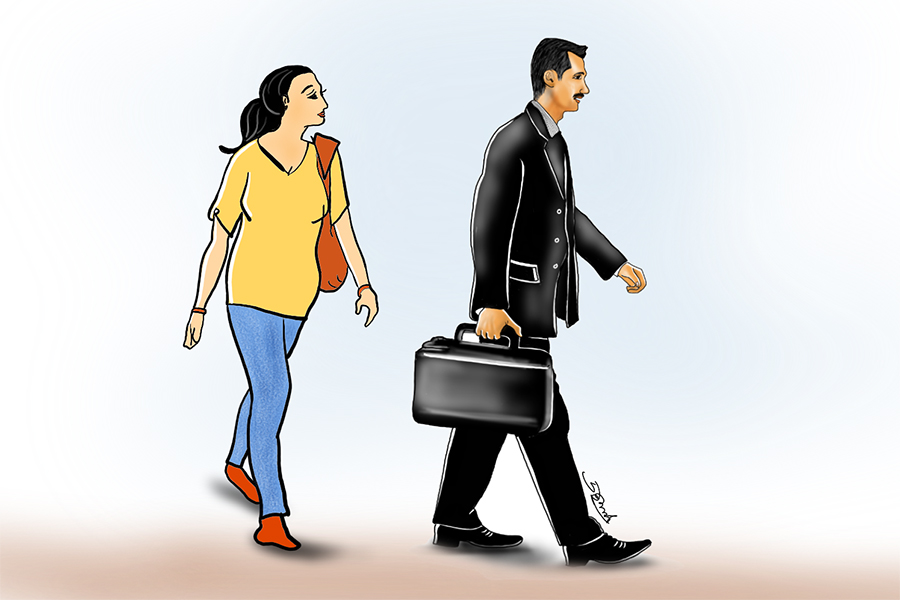