Temple Of The Sacred Tooth Relic & The Procession Ceremony

Temple of the Tooth which is popular in Sri Lanka as Dalada Maligawa is one of the most sacred religious places among Buddhists and non Buddhists as well. It is located in Kandy district of Central Province and once it was the greatest kingdom in Ancient Sri Lanka. We believe that Lord Buddha’s left upper canine tooth is placed here. According to the historical legends this was brought to our country by two Indians called Princess Hemamala & Prince Dantha and the tooth was hidden in Princess Hemamala’s hair. It was received in the reign of the king Keerthi Sri Meghavanna & rituals of Dalada Perahera was originated immediately as it became a precious sacred object. Buddhists pay the greatest respect to the sacred tooth considering as the living Lord Buddha. The tooth was brought on the backs of elephants in special occasions. Lots of enemies tried to attack the tooth relic as the Sri Lankans believes that the ruler or the king of the country should own the tooth relic. In all those attacks, nobody could destroy it as a result of that our Buddhist kings and monks were able to protect the tooth relic with great effort. Initially the tooth relic was not located in Kandy. It was moved from capital to capital when the kingdom was changed. Once Sri Lanka was a Colony of Portugese and Dutch, the Temple of the Tooth Relic was severely damaged. In the recent history in 1998 LTTE terrorists bombed the temple and had done huge damages. But restoration began immediately as it was a giant shock to the Buddhist society. Both local & foreign pilgrims who visit this place should wear a decent white dress before entering the temple. If the dress of the visitor is not suitable, from the entrance they’ll be given white clothes which make their appearance more decent. The relic of the tooth is kept in a two-story inner shrine fronted by two large elephant tusks. The relic rests on a solid gold lotus flower, encased in jeweled caskets that sit on a throne. Monks in both Malwathu & Asgiri parties are taking care of the rituals & customs performed daily. Sri Dalada Maligawa is a world famous religious place due to various cultural activities performed annually. Though daily, weekly & monthly performing ceremonies with lots of rituals are taking place in Dalada Maligawa, annually four major ceremonies also take place. They are named as Aluth Sahal Mangallaya, Avurudu Mangallaya, Esala Mangallaya and Karthika Mangallaya. 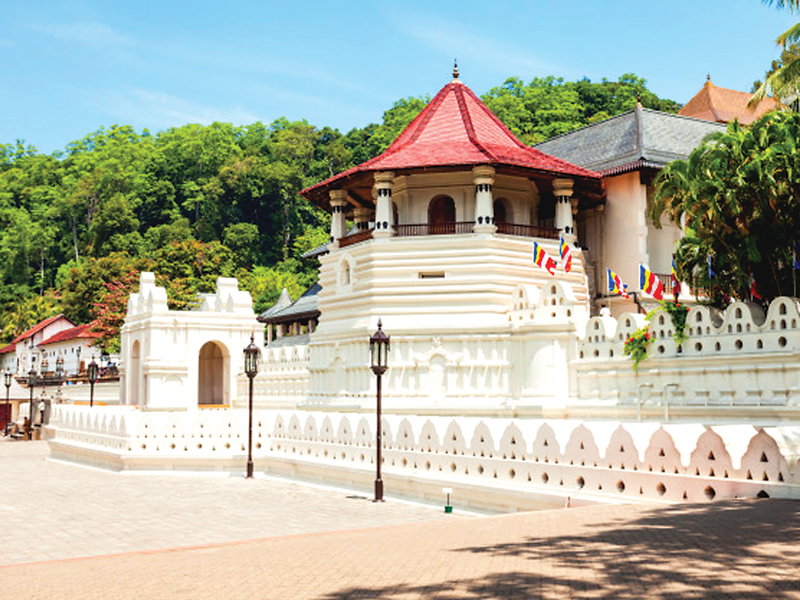